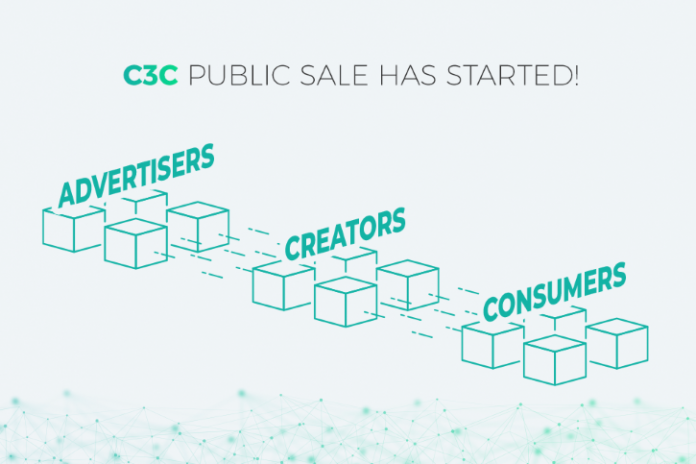 The C3C token’s initial coin offering goes live today after a superlative pre-sale which saw the soft cap target exceeded by over 75%.

As a result of the pre-sale success, the team are bringing the ICO forward from the original launch date of the 25th, meaning investors can get their hands on C3C tokens right now.

C3C aims to radically disrupt the inefficient and outdated online advertising industry by connecting advertisers, creators and consumers under one decentralized network. The C3C token itself will be used to reward creators, compensate consumers, and provide advertisers with a direct pathway to their target audience.

The modest soft-cap of $1 million was exceeded weeks before the private and public pre-sale ended, with close to $1.8 million being raised from minimum investments of $5,000. Given the pre-sale performance, don’t be surprised if the $15 million hard-cap is achieved soon.

The team is already ahead of schedule, and the combined forty-thousand followers on C3C’s Twitter and Telegram pages will now be able to get in on one of the highest rated upcoming ICO’s of recent months.

Indeed, the C3C ICO has been rated at a 4.8 out of 5 on popular ICO rating site ICO Expert, while media coverage has been building steadily for the ICO over the last few months.

C3C recently announced a partnership with Multiversum, a 4th generation blockchain, which provides the ideal fast and scalable infrastructure for the C3C project. The Multiversum CEO, Andrea Taini, has since joined the C3C team in the role of an advisor – and C3C’s ongoing development doesn’t stop there.

The team recently entered a research cooperation with the Kyiv Polytechnic Institute, one of Europe’s leading technology universities. The project covers deep research in blockchain scalability and security.

The research team will also be exploring efficient models for implementing scalable volumes of micro-payments on the blockchain in anticipation of the eventual rollout of C3C’s technology on live websites.

C3C has already secured fertile testing ground for the rollout of its technology, with popular cryptocurrency news site, CryptoCoin.News ready to test out the C3C network. The team behind CryptoCoin.News is the same that’s behind C3C, meaning the website – as well as its affiliates – will provide an excellent opportunity for the technology to be put to into action straight away.

Likewise, investors will be able to see an immediate working example of the technology – something that very few blockchain projects can say right now, as roadmaps currently extend years into the future. Unlike other blockchain projects, the C3C.Network has a critical mass right from the get-go.

5 Reasons Why Debt Is Good

Should You Invest Directly In Equity Or Via MF’S?